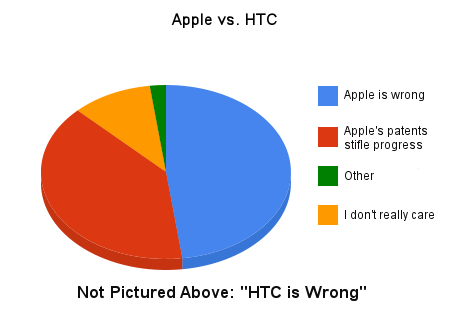 For those of you who are unaware, every week Android Guys holds a poll accessible from the Android Guys App. For this week’s poll we picked the most controversial issue currently running through the Android communities; who do you feel is in the wrong regarding Apple’s latest lawsuit against HTC? While most of us are active Android promoters I assumed that we would get some people who see this from a legal point-of-view. Nope, apparently we are all unified in saying that Apple is in the wrong and that their patents stifle progress in the mobile industry. Not one person said “HTC is Wrong“!

My favourite part about sifting through the approximate 100 responses was the people that answered “Other”, just so they could have their own personal say. Here are just 2 of the responses I got, “[email protected]$% Apple” and “Apple and Jobs are all b*****”.  Obviously, this a strong issue for most and not something the Android community is taking lightly.

Download the Android Guys App and stay tuned for next week’s poll!