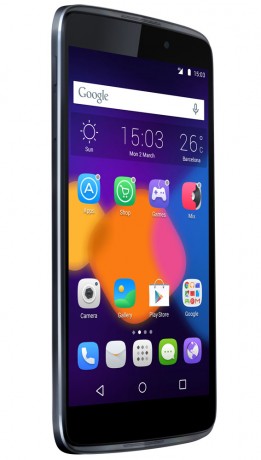 Alcatel OneTouch has announced its next flagship phones for 2015, the Idol 3 series. The Idol 3 comes in two different screen sizes, 4.7 inches and 5.5 inches. However, there are more than just size differences between these two phones.

The Idol 3 with a 5.5 inch display comes with higher specs than the 4.7 inch Idol 3. It comes with a full HD display and the octa-core Snapdragon 615 which has four cores clocked at 1.5 GHz and four cores at 1.0 GHz plus 2GB of RAM and 16GB of on-board storage. It is rocking an 8-megapixel front-facing camera with a wide-angle lens and a 13-megapixel Sony lens on the back. All of this is being powered by a nice sized 2,910mAh battery and the 5.5 inch Idol 3 retails for only $249.

The smaller 4.7-inch Idol 3 has a decreased spec list. The screen is 720p and it comes with a 1.2GHz quad-core Snapdragon 400 processor. Its RAM is decreased to 1GB but it maintains 16GB of internal storage. It also includes a 5-megapixel front-facing camera and the same 13-megapixel Sony lens on the back. The battery capacity is also brought down to 2000mAh. The 4.7-inch Idol 3 is retailing for $199.

Both phones include connectivity options for LTE and HSPA+, Bluetooth 4.1, FM radio, GPS, and WiFi.The small internal storage offering is remedied by a micro SD card slot supporting up to 128GB on both phones. The Idol 3 handsets will go on sale globally in the second quarter of this year. You will be able to purchase the Idol 3 unlocked from Alcatel’s website. Alcatel is talking to US carriers for distribution deals, but there are no plans yet.

What do you think of Alcatel’s new budget-friendly offerings? Tell us in the comments!