New benchmarks spotted on AnTuTu could give us a rather clear look at what we might expect for the next generation of Samsung Galaxy S smartphones. Spotted under the model number of SM-G925F, it’s assumed that these are the hardware details that make up the Galaxy S6.

Specs revealed in the listing include a 64-bit octa-ctore Exynos 7420 processor, a 5.5-inch 2560×1440 display, and 3GB RAM. In terms of cameras, the back could house a 20-megapixel shooter with the front seeing 5-megapixels. Running Android 5.0 Lollipop, the phone is shows as having 32GB internal storage. 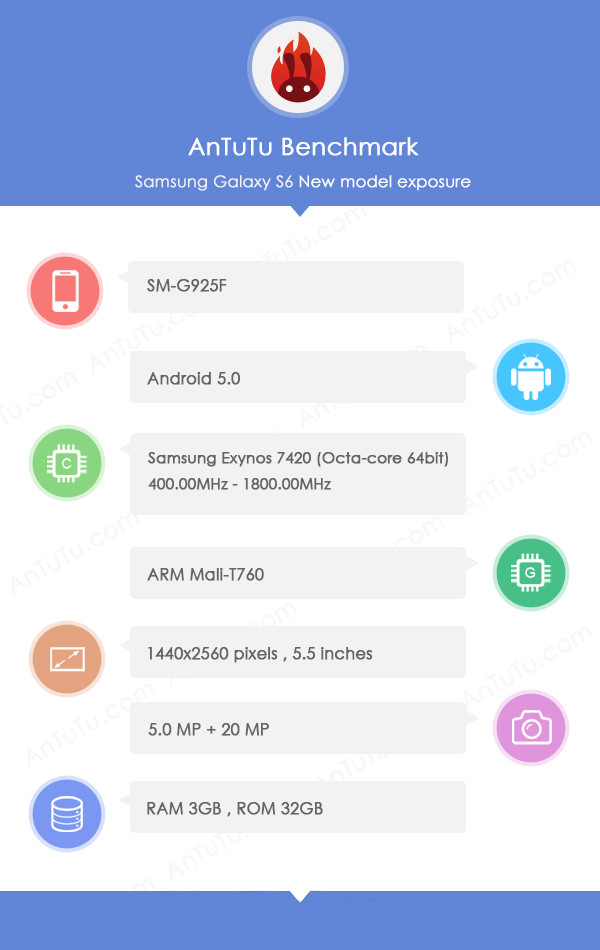 Reportedly operating under the code name of “Project Zero“, the upcoming Samsung smartphone could be a total departure from the previous models. We might hope for some of that aluminum or metal framing that has graced the Galaxy Alpha and some subsequent models. Whatever it that they do, let’s hope it does better than the Galaxy S5.

Rumors indicate Samsung could introduce the Galaxy S6 in the early months of 2015, perhaps around Mobile World Congress.