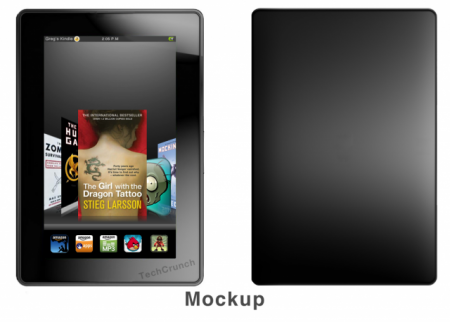 Last week Amazon began sending out invitations to a press event scheduled for September 28, in NYC. Although the invitation did not say what the event was for, almost everyone immediately thought “Amazon Tablet.” While we were all expecting a tablet announcement, it wasn’t until yesterday’s confirmation by TechCrunch that we began seeing some details.

According to TechCrunch, tomorrow mornings event will unveil Amazon’s newest Kindle tablet, the “Kindle Fire.” The Kindle Fire is a 7″ Android tablet that looks similar to the Blackberry Playbook and was apparently designed and built by the same original design manufacturer, Quanta. There isn’t much information on internal specs but it apparently features a Texas Instruments dual-core OMAP processor of an unspecified clock speed.

On the software side of things, the Kindle Fire is supposedly based off of Android 2.1 (no idea why) but bears almost no resemblance thanks to Amazon’s own customization. It comes as no surprise that Amazon has done its best to remove any and all references of Android from their Android tablet. It will of course be Fully equipped with the Amazon App Store, Amazon’s MP3 service, and the Kindle bookstore. It’s also said that Amazon is trying to close some last-minute deals with Fox for movies and TV shows through their streaming video service.