Amazon, as it is often wont to do this time of year, has announced new models in its Fire lineup of tablets and TV products. For 2015 Amazon has expanded its portfolio a bit, bringing in a new low price point ($50) for its standard 7-inch model while changing things up on the larger side, too. And, over on the TV front, the company has bolstered that family with new hardware and software capabilities.

Here’s a quick breakdown of what’s in store for the seven new devices rolling out this fall.

Fire tablet – Setting the bar for what can be had at a very attractive price, the new tablet retails for $50.  Hardware features include a quad-core processor, 7-inch IPS display, cameras on the front and back, 8GB storage, with microSD support (up to 128GB). Powered by Fire OS “Bellini”, the new tablet also comes loaded with Amazon Underground and provides quick and easy discovery of content, deals, and more. Amazon will also sell this tablet in a “Buy 5, get 1 free” deal. That’s six tablets for $250. Pre-order today with shipping expected on September 30.

Fire HD 8 and Fire HD 10 – Offered in 8-inch and 10.1-inch versions, these two models will be offered in a variety of colors. The 8-inch has four color options: black, magenta, blue, and tangerine; the 10.1-inch is sold in black and white. . The smaller comes with 8GB and 16GB options while the larger has 16GB and 32GB capacities. 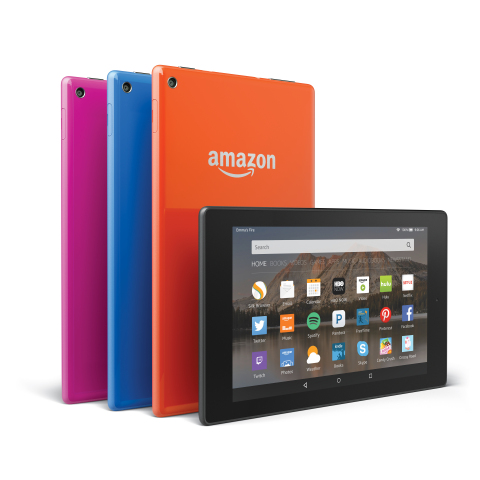 The displays are protected by Gorilla Glass to ensure they withstand the scratches and scuffs that come with taking them everywhere. Also running the 5.0 Bellini OS, other standout features include Dolby Audio with 5.1 virtual surround sound and expandable storage capacity (up to 128GB).

Fire Kids Edition – A refresh of the child-centric model introduced last fall, this one comes in with a lower price point for 2015. What’s more, the kid-proof case has been updated in the process. Toss in one year of Amazon FreeTime Unlimited and a two-year guarantee and you’ve got a bargain for $100.

Fire TV and Fire TV Stick with Voice Remote – The TV units pick up support for 4K Ultra HD this year as well as the Alexa technology found in the standalone Amazon unit. The Fire TV sells for $100 with shipments starting October 5. The Fire TV Stick retails for $40 with the standard remote or $50 if you bundle it with a Voice Remote. Shipping begins October 22 for the HDMI-based dongle. 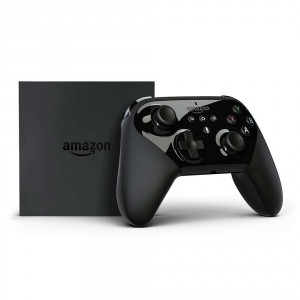 Fire TV Gaming Edition – A  new version of the console-like unit, this one includes the 2015 Fire TV, the new Fire TV Game Controller, a 32 GB microSD card, and two popular games: Shovel Knight and Disney’s Ducktales. Worth roughly $190, it’s bundled together for $140 and starts shipping October 5.