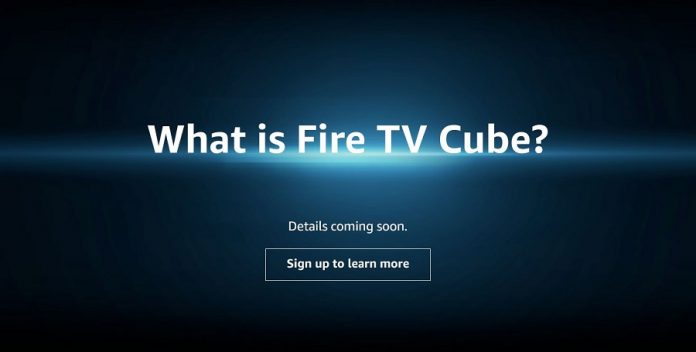 Amazon is apparently gearing up to launch a next-generation video streaming Fire TV. AFTVNews recently stumbled upon a page dedicated to an upcoming Amazon Fire TV Cube product, but details are scarce at the moment.

The page doesn’t provide any additional information on the device, but it does invite users to sign up with their name and email address to receive more info.

The same AFTVNews reported back in November of last year that Amazon was gearing up to launch two new Fire TVs. The first one, the square-shaped Fire TV dongle launched shortly. While the second device, a cube-shaped box, it’s probably the upcoming Fire TV Cube.

The cube Fire TV is expected to be Amazon’s high-end Fire TV. The product will reportedly come with far-field microphones and an integrated speaker, as well as a LED light bar.

The upcoming product is said to be a hybrid between the Fire TV and Alexa-powered Echo speakers. Today to be able to control Fire TV devices with Alexa on board, you need either a voice remote or a separate Echo speaker. But apparently, you won’t have to rely on either when using the cube-shaped device.

AFTVNews estimated the device will cost around $100 when it launches, but keep in mind nothing has been made official just yet.

There’s also no word on when Amazon plans to officially unveil the new Fire TV. Although if the product page is live, we have to assume it won’t be long now.

Earlier this month, we brought you news that Amazon announced it has partnered up with Best Buy in order to sell a series of new smart TVs build on the latter’s Fire TV operating system.

The new TV models will be offered by Insignia and Toshiba and should make it out on retail shelves this summer. So it’s possible the upcoming Fire TV Cube will make a debut around the same period.