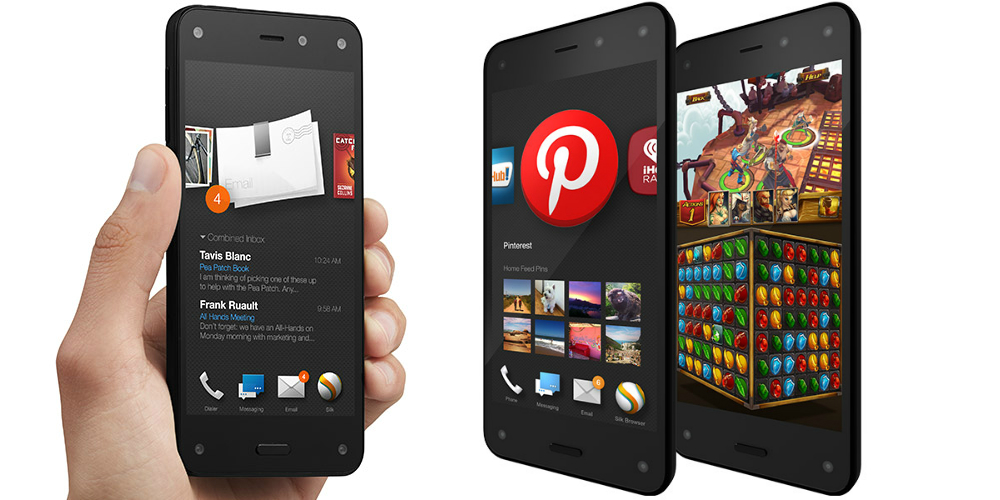 Amazon on Wednesday finally revealed the long-anticipated Fire phone. Making its debut at an event in Seattle, the smartphone teeters on the the balance of mid-range and top-tier hardware.

Specifications include a quad-core 2.2GHz processor with Adreno 330 GPU, 2GB RAM, and a 13-megapixel rear camera with optical image stabilization and f/2.0 five element lens. The display, as we’ve come to expect, is a 4.7-inch screen with 590 nits which means it has better viewing outdoors. Other hardware includesd dual Dolby stereo speakers with stay-flat cables (ribbon-like) with magnetic earbuds. But, lest you believe this is all about hardware, there’s plenty of great software and enhancements that will certainly “wow” consumers.

You know all those rumors about the 3D features being built into the phone? It’s here, and it centers around “Dynamic perspective.” Starting with the lock screen which shows clock sitting on a moss-covered rock, with trees around it, the phone adds depth and perspective to a lot of content. Maps? Want to see how tall a building is or what it looks like in relation to the surrounding are? Presto. Thanks to four front-facing and head-tracking cameras and some sensors, the Fire  provides and intuitive experience that doesn’t need to be taught to enjoy. Tilt and move the device and you can be launched into Yelp from a map listing.

Shopping in the Amazon store also gets the same treatment. Tilt and you’ll cycle through product listing. Move over to the web browser and you’ll find tilting will “autoscroll” through a website. Reading a book? Tilt and you’ll change pages. You get how it works because it simply makes sense. The cameras atop and below the display create stereo vision and include infrared lighting. Yes, it should work in the dark. Oh, and developers should surely eat up the Dynamic Perspectice SDK which lets them add depth to their apps and games.

Other experience and services

Additional features include unlimited cloud storage for your photos using Amazon Cloud Drive, Second Screen and X-Ray. There’s a lot of crossover from their Kindle Fire line of tablets, which should come as no surprise. Also present are Audible, WhisperSync, and the MayDay customer service feature. Tying into Amazon’s recent announcement of Prime music service, the Fire  has access to more than 1 million ad-free songs.

The home screen offers widget and apps; the carousel across the top is very much like what you have with the Kindle Fire tablet line. Users can pin items to the carousel for immediate access to your favorite content.

For a limited time, Fire also includes a full year of Amazon Prime—FREE Two-Day Shipping on millions of items, unlimited streaming of movies and TV shows with Prime Instant Video, unlimited, ad-free streaming and downloading of over a million songs and hundreds of playlists, and over 500,000 books to borrow from the Kindle Owners’ Lending Library. If you’re already a Prime member, we’ll add 12 months to your existing account.

One particularly cool feature, Firefly, lets users snap a picture of just about anything (over 100,000,000 items) and have it pull up the Amazon ecosystem. Be it books, CD’s, DVD’s, QR code, email, URL, or other products, it hands things off to Amazon immediately. Yes, it also listens to music, TV, or movies (like Shazam) and points you to Amazon to let you purchase the content or listento/watch it through your account.

Take a picture of artwork and Firefly will toss you to Wikipedia for additional details. See a phone number on a sign? Use Firefly and it will push you into the dialer. And, because you’ll likely use this feature quite a bit, you’ll love the dedicated hardware button found on the smartphone.

Developers will certainly appreciate the Firefly SDK which allows for quick and easy integration options.

The Amazon Fire will be offered through AT&T exclusively in the United States; the launch date is pegged for July 25 but pre-orders are available immediately. Pricing is $199 (32GB) with a two-year service agreement or $27 per month on AT&T Next plans.

The Amazon Fire Phone is officially off the shelves

Amazon to lay off engineers involved in Fire Phone development