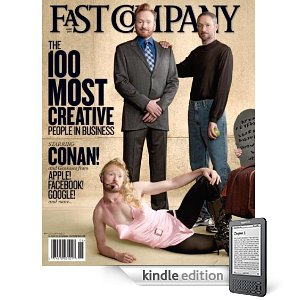 Could Amazon be adding a bunch of digital magazines to their repertoire in anticipation of their Android tablet launch?  It certainly looks that way. According to a website called Beyond Black Friday, the online giant has been busy lately, offering up a host of new Kindle versions of magazines.  They recently noticed that  multiple titles, including National Review, The New Republic, Reason, Fast Company, Harvard Business Review, and Just Justin (Bieber!) arrived over the last few weeks.

Now we don’t follow Amazon’s digital magazine lineup very closely so we can’t say if these were just next in a series of offerings or if Amazon is increasing the speed in which new titles are added.  It’s very possible that they are simply rolling out new magazines, trying to broaden the appeal of Kindle.  As Barnes & Noble’s NOOK gets more tablet-like, Amazon may be countering with additional content.

On the other hand, it’s also not unlikely that this becomes another selling point of the Amazon branded tablet experience.  In fact, music, books, applications, and magazines converging around a  device from a trusted source sounds terrific to us.  How about you?

Respect knuckles to Jon Cog for the heads up.