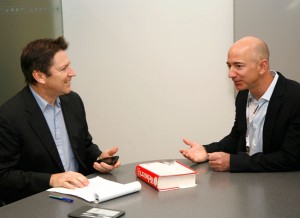 Is Amazon working on an Android tablet?  You bet.  Are they ready to admit it publicly?  Not yet. Consumer Reports recently spent some time chatting up founder and CEO, Jeff Bezos where they pressed him on the potential tablet, When asked whether they were planning on releasing a multi-purpose tablet, Bezos advised that we “stay tuned”, later adding that Amazon “will always be very mindful that we will want a dedicated reading device.” But when it comes to an actual device announcement or window, he said. “In terms of any other product introductions, I shouldn’t answer.” In other words, it exists, but it will be a while before Amazon says anything publicly.

While Amazon has been rather guarded on their tablet plans, word on the street is that the company is developing something in conjunction with Samsung.  Then, there are rumors that Quanta is taking orders from Amazon for tablets  as well.  Could there be more than one in the works?  Maybe an entire family of products?