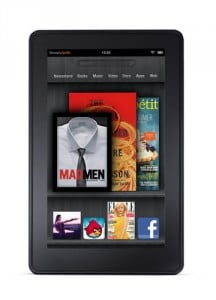 Amazon’s Jeff Bezos is currently on stage in New York, giving us a rundown of all things Kindle.  After looking back at the previous four year of success, he is starting to unveil new products and features.  On such feature is expected to be the hotly-anticipated Kindle Fire tablet, running Android.  We’ll be back with more information once it’s made public, but we have a pretty solid idea as to what’s in store.

According to a Bloomberg story hitting the wires within the last hour, the Amazon Kindle Fire will debut with a $199 price tag.  The arrival date is November 15th, but you may want to pre-order yours.  Sales will be ridiculous.

The Kindle Fire will have a 7-inch display and sell for $199, compared with $499 for Apple’s cheapest iPad, Amazon executives said in interviews with Bloomberg Businessweek. The device, a souped-up version of the Kindle electronic- book reader, will run on Google Inc.’s Android software, the Seattle-based company said.

UPDATE: What does the Amazon Kindle Fire have?