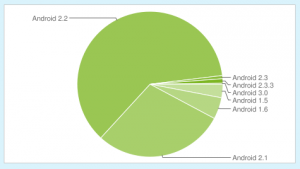 The Android team released their latest figures this week and it shows us that more than 90 percent of all users are running 2.1 or higher.  At 61.3 percent v2.2 (Froyo) is the dominant build of Android, followed by v2.1 (Eclair) at 29.0 percent.  Honeycomb has started to make its presence felt at 0.2 percent of the pie but still significantly trails the footprint of Cupcake and Donut which still account for a combined 7.8 percent share of Android.  As Android continues to push 350,000 units out per day, outdated versions will slowly dwindle down to the point of obscurity, or as the graph like to call it, “other”.

Developers have long had this chart to refer to for help in coding direction, but recently also picked up additional statistics for their applications.  Google and the Android team are doing a great deal to ensure developers have the tools needed to write awesome apps, for the right versions of Android. 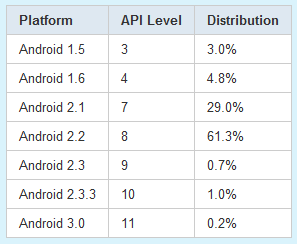 Things you may have missed from the Google I/O keynote