Andy Rubin has only five tweets, of which the last one stated that there are now over 500.000 Android activations each and every day. That’s good news, of course, but what exactly is an activation? That’s what I’m here to explain.

First, you need to know the definition of an “activation”. A device gets activated when you sign in with your Google account on a device. That means that an activation count excludes devices without Google Apps, like certain Archos devices and most of those Chinese iPad knock-offs running on Android 1.6.

Crystal clear, right? No, not really. An often heard question is the following one: “Does everytime I flash a ROM count as an activation?”. No, and I’ve got proof. Take a look at the picture below. I’ve had a lot of devices — most of them are review samples — and I’ve flashed dozens of ROMs on them. 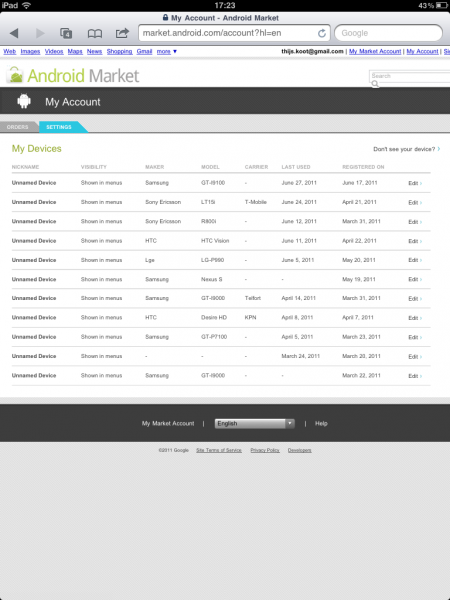 If a ROM flash would count as an activation, I would now have over 70 devices listed here, but I don’t. Except for a few errors, they all appear only once in the list. That leaves us with a few explanations:

Let’s run through these options, shall we?

1. Google stores your IMEI to identify your device

That’s very plausible, but it doesn’t explain why WiFi-only tablets and PMPs are registered in the the Market. An IMEI number relies on a GSM radio, so devices without a cellular radio don’t have a true IMEI. It is possible to fake one, although that is an unlikely thing for Google to do, however possible.

2. Android phones have a different identification option we don’t know about

Possible, but unlikely. It’s possible to flash Android on a non-Android device, like the HTC HD2 for example, which means those devices can’t have a special identification option.

3. When you log in with your Google account on a previously used IMEI or IMSI, it doesn’t count as an activation

4. Google uses your IMSI, which is something similar to an IMEI, but based on your SIM

This has roughly the same issue as the IMEI thing: it doesn’t include WiFi-only devices. I don’t expect it to be this one. It’s possible, but unlikely.

5. Google is watching you.

Yeah, and those pancakes you eat for breakfast? Those are tiny GPS tracking devices. And Russia is about to invade the U.S. This one is a bit far-fetched, but I’ll leave it up to you what to believe.

In conclusion, it’s not completely clear how Google counts the activations, but I personally think number three is the most probable option. I’d love to see a statement from Google regarding this. So, what do you think? Is the high activation count due to constant ROM flashes by rooted users, or is Google keeping an eye on us? Be sure to leave a comment below, or on our Facebook Wall!