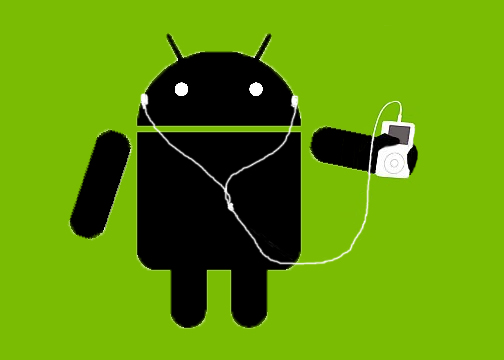 During a subway ride to work, I was smacked in the face with an abominable, sacrilegious image that rocked me to my core. To my right sat a young man playing with his Motorola Droid. But this was no ordinary Droid. This Droid was being tortured by the headphones that had been rammed into its precious little headphone jack.

Let me try and paint a clearer picture of just how horrible this was. The headphones were white, sleek, had a little bit of gray near the earpieces, and reeked of apples. I know… I too was shocked. How could something so precious be treated with such blatant disrespect? Furthermore, how could someone of such high intelligence (an Android user) stoop to such a low and despicable level as to force such vile piece of music playing spawnage into the orifice of such a pure and noble creature?

Here’s how I think it happened. About a month ago, this young man went to an Apple store and purchased this device called an iPhone. After using it for a few days, he became extremely frustrated with the lack of cell service in his area and became tired of Apple rejecting applications that he wished to use. In spite of the phone’s sexy appeal, the young man decided that he needed to have more of an “open” relationship with his phone, and this one wasn’t cutting it.

On his way to return this closed off device, he got lost. After many minutes of aimless walking, he passed by a Verizon store where his future love awaiteth him. He was instantly mesmerized by its amazing user interface and open nature, so much so, that he was forced to switch carriers and secure himself a Droid. Using the new Google Maps Navigation, he then found his way to the Apple store where he returned his fling of the past, shedding not a single tear.

Hours later, as the young man crossed the threshold of his humble abode, he reached into his pocket to find nothing other than the Apple headphones that he had forgotten to return to the store. Not wanting them to go to waste, he decided to use them with his new phone, figuring it would be okay to subject his new found friend, the Motorola Droid, to the pain and hurt that these headphones would cause it.

I ask you sir, does your new phone not deserve a new and un-blemished set of headphones that won’t forever remind you of Apple’s evil agenda? I shun ye and your wicked ways, random man on the subway. Your Droid deserves a better mate.

What’s my point? Truth be told, I wasn’t really sure where I was heading with this post when I began writing it. I don’t really care that the guy was using Apple headphones with an Android phone (it just made for a nice story). I happen to love Apple’s headphones and use them all the time. I don’t see that changing anytime soon.

I think my point is as follows: Apple’s impression into the market goes far beyond the iPhone/iPod. Apple is synonymous with portable music. Everything that plays music from the depths of your pants pocket is called an iPod. Regardless of how many people adopt Android (phones, tablets, etc.), music will always be a market that Google can’t touch. It’s no wonder that Google hasn’t put more effort into Android’s music application. To them, it’s a lost cause.

The majority of tech-savvy people use some form of iPod for their day to day music playing. You’d have to be crazy not to. It’s hands down the best portable music player out there (sorry Microsoft). What I saw on the subway attests to this. Being an Android user doesn’t exclude you from the Apple world. Yes, it excludes you from the iPhone world, but that’s a horse of a different color. In time, Android may take over the smartphone market (I firmly believe that it will), but music is Apple owned, and sadly for us, I think Google realizes this. That’s why Android’s music app is garbage, and that’s why you’ll see people on the subway using Apple headphones with their Android phones.