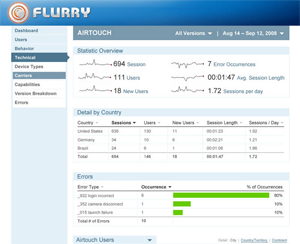 Everything that can be invented – has already been invented. – Charles Duell, Commissioner of the United States Patent Office, 1899

I have to admit that my trips to the Android Market have significantly stalled over the last few weeks after noticing a decrease in apps that I felt were “game changers”. Turns out this may have just been the calm before the storm. Two Silicon Valley companies are reporting that an Android App Boom is imminent.

San Franciso-based mobile metrics company, Flurry has issued another report that casts a favorable light on Android. They are reporting an unprecedented 94 percent increase in the number of Android related projects started by developers between September and October. Flurry should know as well as anyone. Nearly 500 developers have embedded Flurry Analytics across 1500 applications that help Flurry track more than 100 million end user sessions!

Admob recently noted that Android accounted for 17 percent of all smartphone traffic in its network in September. That’s up 13 percent from August. More traffic equals more consumers which will attract more developers. AdMob went on to add the following in their blog.

“There is also huge marketing muscle behind Android now. Verizon, who has been aching for a handset to combat the iPhone, launched the much discussed Droid campaign this past weekend. Motorola is betting the house on Android and investing significantly in the Cliq and MotoBlur functionality.”

When you combine the marketing muscle, the increase in traffic and the ongoing Android projects on tap, it all seems to point not only to increased awareness for Android but more and more apps on the way. Let the app tsunami begin!