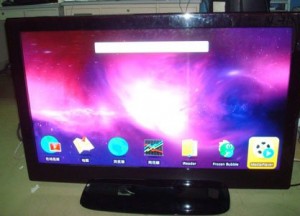 In an article over at Chinitech.com, it is being reported that the television set pictured to the left is the fist set in the world to have the Android platform built into it.  Chinese electronics manufacturer TCL has reportedly been working in their labs since 2008 to integrate Android with one of their displays, with this unit being the product of their efforts.

According to the article this set can connect to the internet, video chat, make purchases online and install Android apps from the Market.

To be clear, this is NOT a Google TV unit, but a independent effort to use Android to converge your television with the internet in much the same way that Google is working on now with Sony and Logitech.

The downside of this TV is that China will most likely cripple much of the functionality since they censor everything but air to breathe over there, but rest assured, TCL will work to find some sort of workaround to the laws and rules they have to abide by.

It is interesting to see a proof of concept like this, and makes me want Google TV to release NOW.