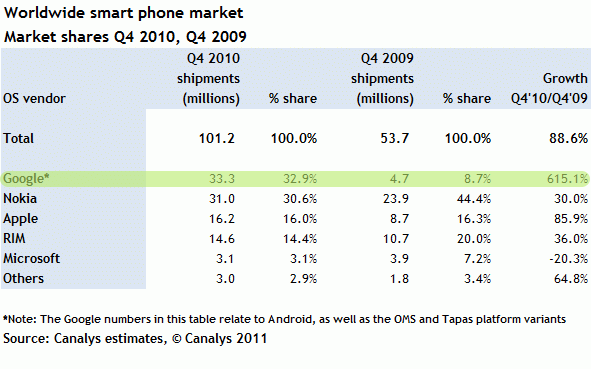 Booya.  Android has just become the number one smart phone platform in the world.  The latest figures from Canalys are in and it shows Android accounting for 33.3 million handset shipped in the fourth quarter of 2010, slightly ahead of Symbian’s 31 million smart phones.  Coming in third, Apple pulled 16.2 million shipped, which was nearly double what it had last year.   BlackBerry handset maker RIM took fourth with 14.6 million smart phones shipped, up from 10.7 million the year before.  Microsoft rounds out the top five at 3.1 million shipped, just slightly ahead of “other” smart phones. Hit the break to see how each fared in terms of overall market share.Market share for Q4 2010

Keep in mind that these figures should not be taken as gospel, rather, they are indicative of trends in the industry.  Every report that comes out offers a slightly different perspective.  The best thing to do is to look at the bigger picture which shows how the various platforms are performing.  As a whole, the smart phone jumped 89 percent from this time last year, topping 100 million units in the fourth quarter alone. For the year of 2010, the total figure comes in  just under 300 million smart phones shipped.  New efforts from all players involved will see this figure decimated come January 2012.