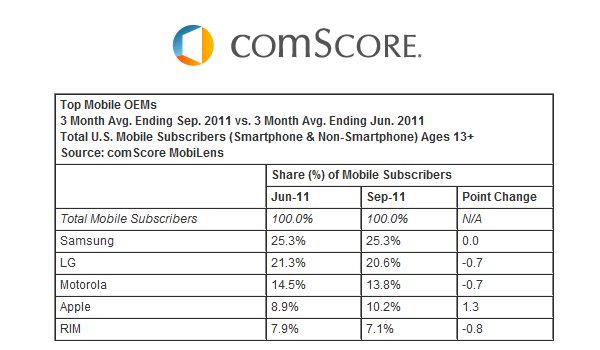 The latest stats from ComScore are out and, as one might expect, Android has continued to grow its lead over other mobile platforms.  Increasing by nearly 5 points (4.6) over the previous quarter and now commands 44.8 percent of the U.S. smartphone market.  Apple, growing slightly at 0.8 point, remains in second place (27.4 percent) well ahead of RIM’s 18.9 percent market share.

It’s interesting to note that Android’s growth over the quarter is exactly the same amount that RIM lost. Are people literally jumping from one ship to another or is that just a coincidental figure?  As for

In terms of which handset makers are doing well, Samsung leads all at 25.3 however their growth remained flat.  LG comes in second at 20.6 percent, followed by Motorola at 13.8 percent.