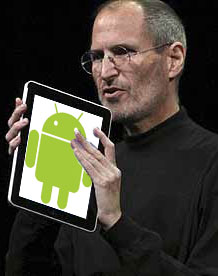 As you might have heard, today lots of early adopters are going to get their hands on the new Apple iPad. As Android fans we should not care about it but if you think about it, it is a great news for Android.

A while back (late 2007), Apple released a new type of phone that marked the start of a new era with touch screen phones.  Now the general consumer is using their phone to check email, look at web pages, install apps, etc.   Prior to the Phone there was not that much going on in smart phones.  Well, there are a few early attempts by Microsoft to fit Windows in mobile devices.

Since the iPhone, each Android handset reviewed gets compared and looked at as potential “iPhone” killers in the mainstream media.  Verizon clearly used the iPhone to promote the Droid with their iDon’t campaign.  As Android fans, it is easy for us to do the comparison to explain what our phone can do to non-techies. You can just start by saying “It is like an iPhone but it also can run apps in the background, you can remove the battery, it has a keyboard…” and so on.

Thanks, again, to Apple, the same thing will happen with the iPad. There are few tablets already released and upcoming running Android: Asus,Kogan, Archos, Google, WePad (my favorite!) and all of them will benefit from the hype surrounding the iPad. Even if they might never sell in the same volume of units as Apple (like the iPhone), overall they will do well just because the iPad will do well. I know that I would never own (certainly not buy!) an iPad but I would certainly consider a WePad and if I have one and need to explain to non-techies, I would be able to start by: “It is like the Apple iPad but better because…”.

Do you agree? Will Apple’s iPad help usher in an era of tablets?  Will Android benefit?  I would like to read your comments…