Motorola’s MOTODEV site has a new addition, an Android-powered flip phone called the Ming A1680. Traditionally the Ming series has only been available in China, with a single model, the Verizon Krave, being released in the U.S. While the device was first spotted in the wild back in April, its debut on the MOTODEV site gives us the full rundown on its technical specs. Though not a superphone, this device may appeal to current flip phone users that are comfortable with that form factor and want to make the jump to Android. 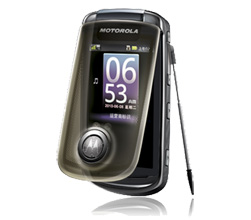 It remains to be seen if Motorola will bring this device to our shores, as the clamshell-touchscreen combination form factor has never caught on here.