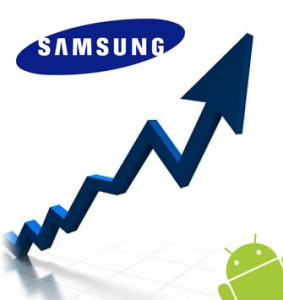 Earlier this year, Samsung made some bold statements about its plans to sell 60 million smartphones by years end. The community responded with a collective “eye-roll,” laughing at the thought of this update fiasco ridden, non-existent support of a company being able to achieve such a preposterous claim. Fast forward to today and all of us non-believers may have to start eating our doubts with a side of “What the…?”

Bloomberg.com has reported that Samsung is estimated to have sold between 18 million and 21 million smartphones globally in the April-June quarter. This is according to email correspondence between Bloomberg and Neil Mawston, a London-based analyst at Strategy Analytics. If these estimated numbers hover around the high end, Samsung would not only have achieved impressive sales but they will have become the leading smartphone seller, passing both Apple (20.3 million) and Nokia (16.7 million). How in the world did Samsung manage to surpass these mighty smartphone giants? Well, with a little help from Android and the awsomesauce of the Galaxy S II of course!


“Samsung’s Android portfolio is selling strongly in most regions,” said Mawston. “Samsung stands a reasonable chance of capturing the top spot on a quarterly basis if it can continue expanding its Android portfolio across high-growth markets like China and Brazil. Samsung and Apple will be at similar levels in smartphones by the end of the year.”

Android has had a huge impact on Samsung’s smartphone success along with the sales of their Galaxy S line. Samsung’s newest iteration, the Galaxy S II, has already managed to more than double Samsung’s operating profits despite a U.S. release! The future looks very promising, not only for Samsung, but for all smartphone manufacturers piggybacking Android’s success. According to market research and analysis firm IDC, Android’s market share will rise to 44 percent by 2015 (an underestimate if you ask me). All this success has the Apple camp, along with others, scrambling towards their lawyers in hopes of throwing a few legal monkey wrenches into the consumer liberation of choice and user freedom. What an exhilarating time to be an Android user!