After allowing developers from more countries to sell apps, Google said that they would give access to paid apps to users from more countries. Well, it happened yesterday, now paid apps are available in: Argentina, Belgium, Brazil, Czech Republic, Denmark, Finland, Hong Kong, India, Ireland, Israel, Mexico, Norway, Poland, Portugal, Russia, Singapore, Sweden, and Taiwan. As you might know already, users will see prices in their own currency, with a tilde (~€2.15) when it is converted from another currency.

Google released an updated Market app, you should now have version 2.07.

This is a silent update; users will not see a notification and will not be prompted to do anything. If you want to accelerate the self-update process, launch Android Market, navigate back to the Home screen, and after 5-10 minutes, relaunch it. 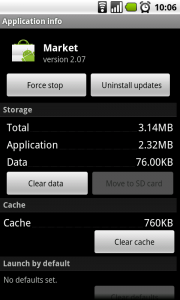 This is a great news for users in these 18 countries but also for developers. We can only wonder why did it take so long for Google to do this, Could it be linked to a new apps store coming from Amazon? Competition is good for consumers.

No words yet on more payment options like PayPal or on the rest of the word but I am sure Google has more surprises in its sleeve to make their Market better than the existing or upcoming competition. So, if you are in one of the new country, which application are you going to buy? Please let us know with a comment.