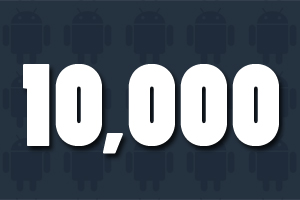 Android Market alternative/assistant Androidlib estimates the number of apps in the market to be a shade over 10,000.Â  While it’s nowhere near Apple figures yet, the number is worth shouting about.Â  Google just put the total number of apps near 5,000 back in May.Â  If these figures are right, that’s 100% growth in less than 4 month.Â  With the number of handsets and carriers getting in on Android, the number of apps is likely to skyrocket near 20,000 by the end of the year.

Other figures worth sharing:

Remember that these figures are not official, nor are they even from Google.Â  Having said that, it’s good to see the Market growing this quickly.Â  Now, if we could just keep the quality trend going… Here’s hoping the ADC 2 brings out a new generation of