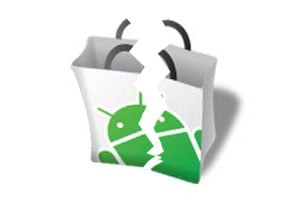 On the Android Market forums there is an uproar: many apps significantly suddenly dropped their counts. We already covered Market issues twice in the past week and Google even apologized to developers. However last night the first thing I noticed was that my “Credit Card” app disappeared from the market search. No, it wasn’t yanked. It can still be found by direct query “pname:bostone.android.credit,” but it does not appear on search by name, by keyword or even when I click on “View more applications.”

My troubles didn’t stop there: just this morning I went on the Market and to my dismay immediately noticed that counts on my apps were down, way down, to the levels of March-April 2010. This also affected position on the top list for Hire*A*Droid, which plummeted about 20 slots.

Being a programmer myself, I understand too well that no one writes perfect software. However, what disturbs me deeply is that there’s really no support system for the Android Market. The Market is not an open source so we have to rely on Google to fix any problems. Yet there’s no bug tracking, no support phone or even email or any way to file a problem ticket. There is, of course, the Android Market help forum, but in my professional opinion it is absolutely unsuitable as an issue-tracking system. It is what it is: a place to whine and cry with no obligation on Google’s part to even acknowledge any of the posts. Sometimes their engineers do reply but that seems to be random and far between. In any event, it places no obligation on Google personnel to follow up, much less to fix the problem.

What is your current situation? Counts, visibility? And what do you think Google should do with this?

Update: Tim Bray of Google has acknowledged these further issues on the Android Developers Blog, and says “the right people are aware of the situation and are working on it.”