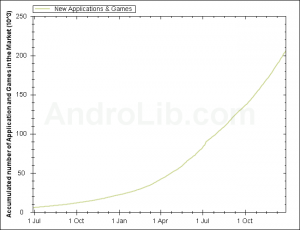 The Android Market continues to swell at an enormous rate, adding new apps and games faster than most expected.  Officially, Google puts the number of available titles at 100,000 but we know it’s higher.  How high exactly?  Androlib.com has pegged the figure at 200,000 apps.

To be clear, an ‘app’ for Android does include Live Wallpapers, widget apps, soundboards, ringtones, and other goofy stuff.  It’s also worth noting that carriers and handset makers don’t tout unofficial numbers, they wait for something to come down from Google.

It’s not necessarily the actual figure we care about, it’s the growth as illustrated in the graphs.  It’s hard to argue Android is doing anything else but rocketing skywards.  Another interesting detail found in Androlib stats show that more than 2.5 billion apps been downloaded from the Android Market.  Watch the number grow by the second!