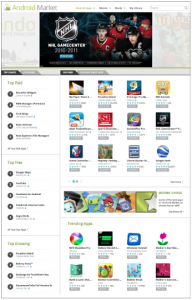 Google is on fire today with Android Market announcements, and they don’t seem to be stopping any time soon. Google has announced the addition of some new “app discovery” features in the Market. Eric Chu announced today that they’re working on implementing new features into both the Android Market, and the online Market as well. In June, the Market will give users a list of apps that are “hot right now”, instead of apps that were popular months ago. In this way, developers will be able to get more exposure for their apps, which is good for everyone. The “Hot Right Now” category will only show apps that are popular from the last 30 days. So, no app will be featured too much on the Market.

This is great news for developers, because it gives them more exposure, and good for users as well, because it makes discovering apps even easier. We’ll try to dig up more information on these new features, but we’re being told that the online Market features are already functional. So what are you waiting for? Head on over to the Android Market and check out the new app discovery features!