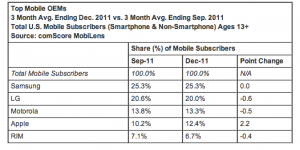 The comScore MobiLens service pushed its latest findings from the October to December 2011 trends. The study surveyed more than 30,000 subscribers across the United States. They found Samsung to be the top dog with a 5% lead over its closest competitor. Samsung has a right to be excited by these numbers, with bragging rights over 25% of the market share. This is likely due to the release of their Galaxy SII series of devices which debuted during the survey.

Google also has a big reason to be excited. Their market share for Android devices is near 50% and almost 20% more than the competition. Of the 97.9 million people with smart phones in the US, 47.3% of them are using Android. 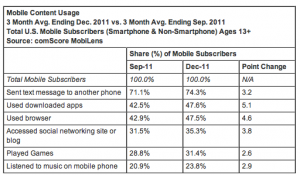 Text messaging is the #1 activity people are doing on their mobile device. 74.3% of mobile subscribers use this service, followed by 47.6% of people that use downloaded apps.

To sum all this up, many people own Samsung devices running Android and they send a ton of text messages.  Who would’ve thought?