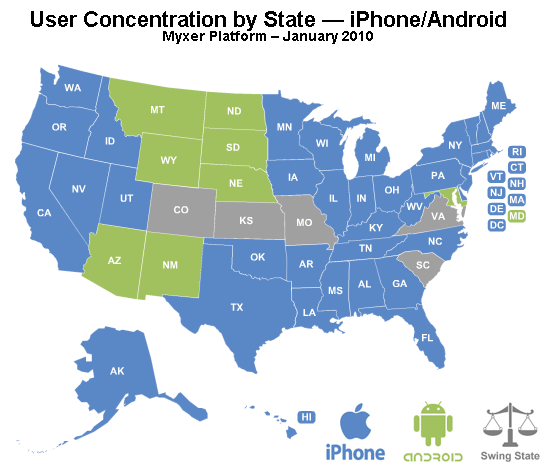 Collectively, Android handsets appear to be outselling the iPhone in the Midwest.  This shouldn’t come as much of a surprise as AT&T’s 3G coverage is practically non-existent out that way.  Verizon, on the other hand, has plenty of coverage for their Droid customers.  Sprinkle in some Sprint handsets and it’s easy to see how Android is doing better. 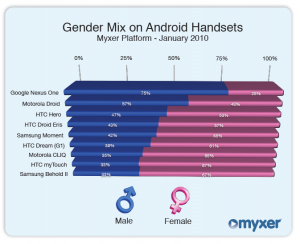 You’ll notice in the map above that there are some states where the race is too close to call.  We should see those, and other states turn Android green over time as more choices in handsets and carriers continue to arrive.

The source of this map, Myxer.com, has a fun little report that breaks down the demographics of Android users on a handset-by-handset basis.  Using their own tools and algorithms, we can see “who” is buying and using the various Android phones.  Scraping different chart data together, we’ve learned that Behold II owners are generally mostly females in their early 20’s, prefer hip hop music, and download ringtones more than other Android users.

The unlocked UMI ROME 5.5″ Android Lollipop phone is on sale for $114 for a limited time