Android Pay has been a popular topic of conversation in the days following its unveiling at Google I/O 2015. Designed to provide a seamless transaction option over credit cards and payments, it plays on the same field as Apple Pay. While the two services have similarities there are also unique selling points for each. 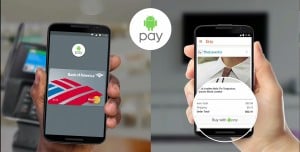 Android Pay, on the other hand is free from such fees thanks to the standardized tokenization security features of Visa and MasterCard. Tokenization is a method that swaps card and transaction data with unique sets of numbers that validate a purchase. In short, it protects your data, as merchants never get access to any sensitive data eliminating any and all chances of data theft.

The dominance of Visa and MasterCard and credit and debit card market may force Apple to renegotiate the terms if they wants to continue to be a competition to Android Pay. At least that is a theoretical way of looking the situation.

In short, Google won’t be earning any money from Android Pay with tokenization in place. Although, it may prove fruitful at a later time in the market when Google expands to other markets pushing for global acceptance of Android Pay. Then again, Google doesn’t directly collect for all that much.

Can mobile payments via Android devices force Apple to adapt or adopt new strategies? How long until average customers are even considering this as a payment option on a regular basis? I would love to hear your thoughts below.