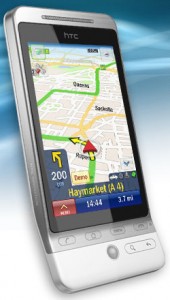 Will Android phones become the default automotive navigation device for consumers? Personal navigation device (PND) use has sky-rocketed in the last few years. With the advent of color touch-screens, simple to use interfaces, advanced features–all at lower costs–these devices have gained mass appeal. Consumer choice in the PND market is robust but one is not limited to PNDs for navigation. Mobile phones are also an option, as there is software available from many of the major PND manufacturers, not to mention navigation apps from the carriers and stand-alone software such as ALKâ€™s CoPilot.

The same features that have made PNDs popular are also becoming increasingly available on modern phones. From Android to BlackBerry, iPhone to WebOS and Windows Mobile, the features are all there: built-in GPS radio, large color touch screen, external speaker, Bluetooth, and data connectivity. The latter seems to be the next big thing in PNDs but the majority, if not all, the above-named mobile platforms are used on data plans. Why pay for data twice? Why buy a separate device that only serves one purpose when the mobile phone can perform that same service and much more? As with many things, there are some pros/cons to each device.

[quote]With the PND, the big pro is the screen size. Most new PNDs have screen sizes from about 3.5 inches to over 4 inches when measured diagonally. The mobile phone screens make for their smaller size with higher resolution. For example, while a Garmin nÃ¼viÂ® 1490T has a 5.0 inch display its resolution is only 480×272. The HTC Hero has a 3.2 inch display with a resolution of 480×320. Aside from screen size, the dedicated PND does navigation very well. One might argue that since it only does navigation, it will be less likely to have glitches while in use. But, dedicated use is also a con for the PND.

Consumers are paying several hundred dollars for a device that only has one use. And when itâ€™s not in use, one must also think of storage. Most people, men in particularâ€”except perhaps the â€œman-bagâ€ crowdâ€”, do not want to carry their PND with them. They are faced with leaving it in the car and risking theft and/or damage from high temperatures in the summer months. There has been more than one occasion where my wife’s purse ended up holding our PND while we walked around, and she wasnâ€™t that thrilled about it, either.

The mobile phone’s greatest pro is that it can do many things AND still be used as a navigation device. Gas prices? Check. Weather? Check. Traffic? Check. Local search? Check. All these connected features of the new and/or upcoming PNDs are already available on mobile phones. Plus, thereâ€™s more. Geotagged pictures can be used as a destination. One can navigate to a tourist destination and then use an augmented reality application to walk around and learn about the area, all with the mobile phone. Of course, the mobile phonesâ€™ main con is their screen size. Even with a higher resolution, the screens are on the smaller side, but this is changing. While mobile phones most likely won’t be able to match a PND’s 5-inch screen, there are phones on the horizon with high-res 4-inch screens. There is also the convenience of only having to buy one device that is very portable and on hand on almost all occasions.

PND manufacturers may have already seen the writing on the wall. Garmin is developing nÃ¼vi phones and TomTom sells mobile navigation apps as does Navigon. It may not happen right away, but sooner rather than later the most popular navigation device will the mobile phone. The trend that could very well tilt the scales in favor of the mobile phone is the low-cost entry into smartphone ownership. The upcoming HTC Tatoo and Motorola Cliq are both expected to be free on contract with some carriers, andâ€¦just like thatâ€¦these customers have a device that is well suited for navigation.

Consumers should expect to see more low-end and mid-tier Android phones enter the market over the next year. Garmin, TomTom, et al will be hard-pressed to compete with such low cost and wide spread entry into the navigation market.