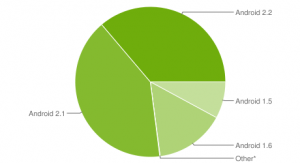 Google has a second chart showing that Android 2.1 powered at least 25 percent of Android smartphones since May 2010. Android 2.2 began to see its jump in popularity between August and September, and both Android 1.6 and Android 1.5 have slowly become less and less prevalent as those smartphones have been updated to the newer software.

So as you can see the newer Android releases are gaining momentum over the last few months. Are any of you running pre-2.1 on your phone?