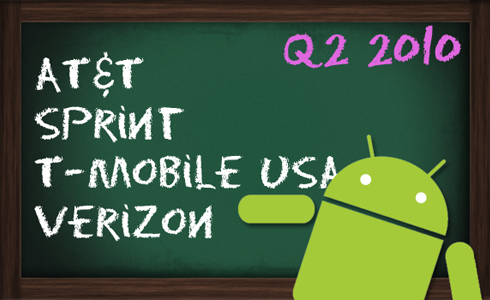 Welcome the first AndroidGuys quarterly report card.  This post is designed to let you guys and gals know how we think the carriers are doing as it pertains to Android.  We conducted a blind, internal poll with members of our staff deciding how they would grade each US wireless provider on their job.   There were a few guidelines put into place to make sure we were all on the same page.  Rumored projects, leaked devices, and yet-to-be announced handsets could not be factored into scoring.  We had to take what the carriers are currently doing and roll it all into a simple grade.  How did your provider do?

First out of the gate with the G1, we’ve seen the carrier release quite a few handsets over the last year and a half.  Unfortunately, most of their phones could be lumped into the mid-range category.  With the exception of the Nexus One, they’ve yet to deliver a phone strong enough to have users thinking of jumping carriers.  There hasn’t been a flagship device that gets people talking.  Things won’t get easier with the upcoming Samsung Vibrant (Galaxy S).  As great as the phone is with its 4-inch Super AMOLED display and 1GHz Hummingbird processor, it’s a “me too” device.  All four of the big players will offer a variant of the device.

One thing T-Mobile has proven over time is that they prefer to focus on experiences rather than specifications.  A lot of readers get caught up in chipsets and specs and look forward to killer devices.  T-Mobile’s approach has been to release phones that have user interfaces and features not found elsewhere.  The myTouch series is a perfect example.  With the recent Espresso build of HTC Sense, Genius Button, and Fave Gallery, they have started transitioning the entire line into a universal experience across the board.  Whether this pays off for them in the long run remains to be seen.

As deep as T-Mobile’s lineup is, phones like the Behold II are G1 are dragging it down.  It’s time to cut them loose and move forward.  As badly as we’d like to see them evangelize Android and its capabilitie in their ads, don’t think expect to see a large-scale campaign any time soon.  With far less capital to play with than the others, they need to be picky when it comes to advertising.  The budget simply doesn’t allow for a $100M Droid Does blitz.  Taking that into consideration, the recent Garminfone commercials and myTouch 3G Slide ads are a step in the right direction.

Ask a random person on the street if they know what Android is and you’re likely to be met with a blank stare.  Ask them if they know what the Droid is and they’ll probably get it right.  Thanks to a massive advertising assault which spans print, radio, online, and television, everybody knows what Droid does.  Even if your aunt doesn’t know there is more than one to choose from, she’s at least aware of a smart phone worthy of iPhone comparisons.  Because of this, Verizon scores major points in our eyes.

Somewhat late to the game, Verizon has shown they are a force to be reckoned with.  Starting with the Droid and continuing with the Droid Incredible and the new Droid X, Big Red has unleashed high-end phones left and right.  Being the nation’s largest carrier and having deep pockets, Verizon has proven they are ready to beat you over the head with talks of their network and handset selection. The LG Ally and Devour are both great pickups for their respective prices and help bridge the gap between feature phone and super phone.

One thing that we aren’t fans of is the early termination fee associated with smart phones.  At $350 it just seems imposing to prospective customers and we’re sure the competition points to it when trying to woo a new subscriber.  On a positive note, we liked how they handled the upgrade situation with the Droid X.  If you are going to drop top-tier phones on the masses, your current customers deserve special consideration.  It’s silly to make people wait nearly two years to buy a new phone because of ETF fears.  As quickly as Android devices evolve, users will cry foul if they have to pay full price over and over.  Hopefully the trend continues with future devices and Verizon eases up on the upgrade policy.

With a lineup of consists of three phones, we were somewhat surprised to learn our general consensus on Sprint was rather favorable.  Thanks to fantastic rate plans that include all the calling, texting, email/web, and data you can eat, the Now Network is extremely enticing to prospective cell phone buyers.  It’s tough to come up with a decent rebuttal to the $69.99 plan when customers are trying to cut corners and budget.

Even if Sprint’s 4G network doesn’t work as fast as T-Mobile’s burgeoning 3G network in places, they do a good job marketing the jargon.  The general awareness of what 3G is and how it affects web and app performance just crept into the mainstream.  And just like that, Sprint has people thinking 4G must be faster.  While the number of 4G markets isn’t nearly as large as we’d like it to be at this point, it’s growing all the time.

Sprint didn’t have an Android phone to speak of until October of last year but the Hero landed with high marks.  For a few months it was the phone to have as it bright HTC’s Sense UI to the United States.  And love it or hate it, the Moment was good enough to win CTIA’s 2010  award for Best in Show.  Not too bad for the first two offerings.  The EVO 4G is the current hot commodity in the Android universe and shows just what’s capable in today’s smart phones.  The gigantic 4.3-inch screen, 8-megapixel camera, and front-facing camera have made it difficult to keep the phone in stock.  Looking forward to the Epic 4G, we expect high demand for the first truly sexy and powerful sliding QWERTY.

Up until two weeks ago, Ma Bell only offered one Android device, the Motorola Backflip.  Although it has a unique form factor and niche appeal, it’s a pitiful offering when compared to the phones at any other competitor.  Even smaller/regional carriers like Cellular South and US Cellular seem to have a better grasp on what types of phones to release.  To be fair, we can’t imagine AT&T is in a hurry to release something that would chip away at the illustrious iPhone.  The recent HTC Aria is a step forward but definitely not a leap.  Like T-Mobile, we get the sense that AT&T wants to offer “experience” devices rather than prowess.  However, looking at the horizon, we see the newly announced Samsung Captivate.  This Galaxy S series device is considerably beefier than the Aria and Backflip but again, it’s something you can find elsewhere.

AT&T hasn’t done much to show Android off, if anything at all.  Many of us were anxious and excited to see what happened when the Backflip came out.  Would Luke Wilson show off how reliable the service was using an Android phone?  Yeah, in one commercial, for a few weeks.  Today, we see nothing out of the carrier in regards to Android.  Sure, there is a Backflip in the commercial with a man hopping a train, but there’s no mention of the device.  Fortunately, Motorola has done a much better job showing phone in MOTOBLUR spots, however effective you deem them.   AT&T announced the Dell Aero months ago yet we’re still waiting on release date.  If and when that arrives, we expect it to be crippled like the provider’s previous devices.

As much as we don’t like the idea of restricting applications to the Android Market only, we understand the decision.  Holding developers accountable is nice and all but it still flies in the face of what Android is all about – choice.  There’s a reason that little check box is tucked away in the settings where users don’t spend too much time.  Turned off by default, it’s already somewhat difficult to stumble upon and accidentally check.  We get the sense that most of AT&T’s Android customers aren’t going to even know where to go to download applications, let alone know that there are alternatives available.  For those that do however, it’s a slap in the face to be told you don’t have the option. Here’s to hoping this isn’t going to happen with every phone they release. Final Grade: D-