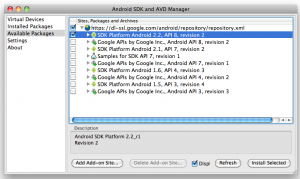 Google announced on the Android Developers blog that the Android 2.2 SDK has been updated to match the most recent system image that was pushed to the Nexus One (FRF91). In the post, Android SDK Tech Lead Xavier Ducrohet says:

As you may have noticed, the source code for Android 2.2, which we call Froyo, has been released.

The Android 2.2 SDK that was released at Google I/O contained a preview of the Froyo system image and today, we are releasing an update to bring it into sync with the system image pushed to Nexus One devices.
I encourage all developers to use the SDK manager to update to this version.

So if you are a developer who has installed the Froyo SDK when it was released at Google I/O, you should open your SDK manager to download this revision 2. This will insure that the emulator can run the very latest release of Android 2.2.