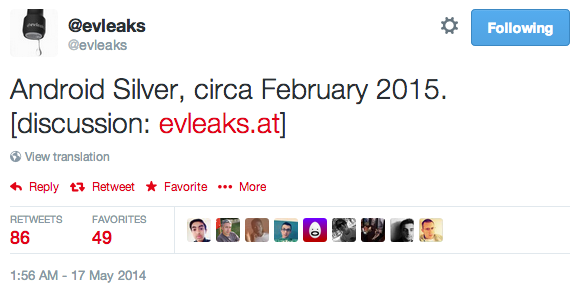 Just recently we heard from Evleaks’ twitter account that the Nexus program was being put down and Android Silver was stepping in. I’m still in a state of shock, because I loved my high end and affordable Nexus 4/5.  But now another leak from Evleaks states:

Ok, so let me get this straight and if I am wrong, drop me a comment.  Nexus 5 release: October 2013, if the Nexus line is really over with and Android Silver isn’t due till February 2015, we are looking at 16 months of no device release from Google.  I have definitely grown accustomed to the yearly roll outs of the Nexus line, but maybe all this waiting will pay off?

What do you think? With the Moto E and OnePlus One joining the Android lineup could we see a new era of smartphones?

Google tweets a picture of a new unknown phone