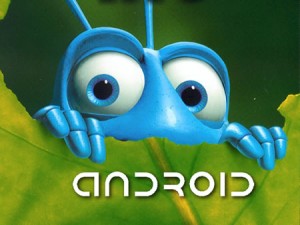 Update: I was wrong. See this new post for new information about the specific conditions that cause the bug. -CF

Let me tell you all a story of my youth. I was in high school, driving around in my first car, a 1976 Mercury Monarch. Approaching an intersection, I saw the stop sign too late; I was going to run right into the guy coming the other way. Last ditch effort, I slammed on the brakes and, inexplicably, the car lurched forward into the intersection. What the eff? The other car swerved, ended up just running into the Monarch’s trunk, took off the back bumper. It was my first accident and my first ticket (for blowing that stop sign). But I couldn’t understand, what was wrong with the car that made it accelerate when I slammed on the brakes?

That’s right, folks, I had slammed on the gas, not the brakes. Nothing was wrong with the car. But it took a while to get that through my head.

Over the past week, a supposed Android bug has gotten a lot of press, both on Android–related sites and mainstream tech sites. A bug report claims that SMS messages intended for one person are getting sent to a different, unintended recipient. Worrisome to be sure, but why has Google taken no action on it, leaving it at medium priority until all the bad press this week?

My guess is that they have been unable to reproduce it. It’s certainly never happened to me, nor to the large majority of Android users. As I write, about 4,500 people have starred the issue on Google Code. Sounds like a lot until you remember that’s 1.5% of the number of Android phones being activated every day. And, reading through the comments, you’ll see that most of those 4,500 have not experienced the issue. They’re starring it because they read about it somewhere.

There are a few reports from people who say they have personally been affected by the issue. Many say it happens when they are rapidly switching between multiple conversations. Others offer magical thinking like “it seems like deleting all my texts fixes the issue for a while” and “it got a little better with the 2.2.1 update.” Sounds like user error to me. Just like when I slammed on the gas, absolutely sure it was the brakes, I’m sure they honestly believe they are not at fault.

Are there other possibilities? Sure:

My guess is that it’s user error, perhaps exacerbated by some user interface feature that makes the error more likely than in third party apps.

Today, Google upped the priority to critical, which some took as confirmation that the bug is real. But at the same time, a Google representative noted that “this is a very difficult to reproduce bug.” It seems clear the priority was upped due to all the bad press, despite their never being able to reproduce the issue internally.

Could I be wrong? Sure, it happens now and then. But the burden of proof is on those claiming a bug exists. I will gladly and loudly raise the alert if someone can produce a reliable way for anyone to reproduce the issue and/or logs of the issue occuring. The steps I’ve seen to reproduce the issue involve switching rapidly between multiple conversations, which, again, is a good way to create user error.