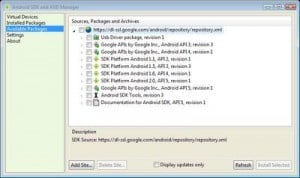 Think back to this about this time last year when the G1 was announced and Android 1.0 features were shown off. One of the first questions asked from the crowd was whether or not Android (or the G1) was going to have Exchange support. The answer was something along the lines of â€œNo, but we won’t stand in the way of anyone else from creating an app for it.” Needless to say, the mainstream tech sites and big news outlets were quick to point out that Windows Mobile still had plenty of breathing room. Android was not ready for enterprise or big business use. Was.

Android 2.0 has added a slew of new features and improvements including Microsoft Exchange, a unified inbox, and support for multiple Gmail accounts. This is not the same as what vendors such as HTC have done. Rather than baking their own support for Exchange in, it’s now part of Android. Period.

Further, developers now have even more tools to create applications that boost productivity. Giving them the APIs for sync, contacts, Bluetooth, and account manager is like giving some of the finest spices and seasonings to a chef. It will be interesting to see how many Windows Mobile users start jumping shipwhen they realize that Android gives them everything they need, and more.