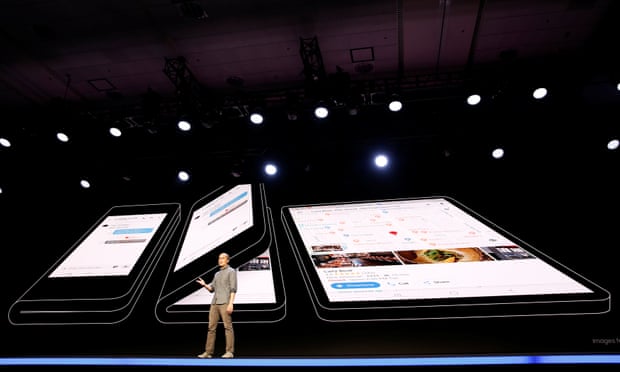 Well soon afterwards, Google also issued a press statement to announce that Android has added native platform support for a new class of devices called “foldables”. Actually, Samsung and Google have been working together when creating the new One UI for Samsung’s phones. So it’s no surprise Google is adding support to this novel form factor.

The idea is that Android will strive to offer a smooth transition from the folded screen state to the unfolded one. To that end, Android developers have already started tackling the problem of fluid two-screen/one-screen software experience, as you can see in the .gif below.

While the foldable phone category is pretty limited at the moment, that won’t be the case for long. Android OEMs like Huawei, LG and Xiaomi are all experimenting with curved displays of their own, so expect more of these devices to make an appearance soon.

Currently, customers interested in trying the flexible form factor out have only one choice at their disposal. Offered by obscure startup Royole, the FlexiPai smartphone is available for pre-order for those willing to spend a small fortune.

Unlike Samsung, the company is using a single folding display outside of the device. In contrast, the Korean tech giant’s phone will use two separate displays to create the foldable phone, one on the inside and a smaller one on the outside.

More details about Samsung’s foldable phone have been revealed

The Infinity Flex Display has been a true challenge for Samsung who had to invent new materials to make the phone pliable. The flexible screen uses a polymer that has been described as being flexible, but though. This means the panel can retain its strength even when folded and unfolded for hundreds of thousands of times.

Mobile devices have looked the same ever since their dawn, but now that’s all about to change. Excited about what’s coming? Let us know in the comment section below.