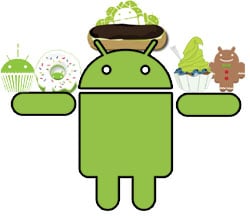 Let me start with a little story. I once was the proud owner of an Xperia X10. It was brilliant, had a bloody fast processor, a good camera and quite a big screen. The best thing was, of course, it was running Android. But its manufacturer, Sony Ericsson, delivered the phone with Android 1.6 while 2.1 was already released. You didn’t notice at first glance, but a lot of nice applications were only developed for Google’s newest mobile platform. My Xperia didn’t play nicely with them. Sony Ericsson kept promising, repeatedly, to upgrade their flagship device to Android 2.1; but the more they promised, the more they postoponed the update.

When the 2.1 update finally arrived, I had already sold my device and bought an HTC Desire. It was beautiful, and was rocking Froyo (2.2). I accidentally dropped it in the water, so I currently don’t own an Android device (apparently they still can’t swim). My next phone will be a Nexus series. At least they receive updates.

Keeping my experience in mind, JR Raphael from ComputerWorld has made a top 5 list of manufacturers who upgrade their devices the most frequently. It’s really interesting to read, especially if you’ve had the same experience with delayed updates as I had. Below are the results. 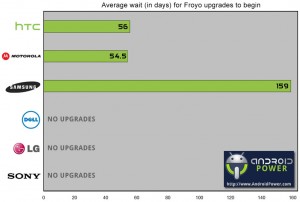 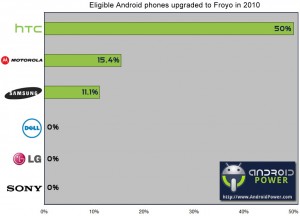 I’ll do a quick summary. HTC rocks. They do upgrade, and they do it fast (apart from the HTC Hero). Motorola is just behind HTC, while Samsung is well known for its never ending delays on its Galaxy S line. While Samsung may make great phones, most of them are still running Android 2.1

What about LG, Dell and Sony Ericsson? Well, let’s just say they fail miserably at updating. We must note that this graph only shows the phones that got updated to Froyo. Phones that were already running Froyo at their launch aren’t included.

Of course the past won’t tell us the future, but it does provide us with basic expectations. More details can be found at the source below.