AdMob’s just-released report (pdf) of mobile ad data from February, 2010 includes great news for our favorite operating system, noting that “Android was the fastest growing operating system in the AdMob network year-over-year.” But more importantly, putting the report in the context of other recent data suggests that Android users are a better audience for advertisers than users of iPhones or Blackberries. 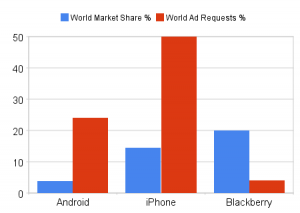 What does this mean? It means that the average Android user is much more active in generating ad requests than users of other platforms, both via web browsing and in ad-supported apps. Simply put, advertisers’ money is much better spent on Android users than on iPhone or Blackberry users.