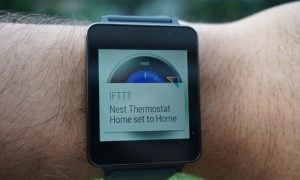 There are many options for home automation and smart home control, but few are as cool and “futuristic” as controlling everything from your wrist. Android Wear home automation is a less common, but instantly cool and convenient way to control your home. Almost everything, from the lights, to the thermostat and more can be controlled via a few apps and an Android Wear watch. First party apps are great, but for full and total control we’ve provided a few handy apps that are essential for smart homes and Android Wear.

The most essential apps on the list are Tasker and the IFTTT family of apps. Tasker is a power user app, but is simple enough that even a novice Android user can make use of it’s powerful tools for deep control over your phone’s functions. Tasker allows for automatic functions to be performed on your device including toggling settings, and launching custom apps. Tasker allows for third party apps and devices that don’t natively support Android Wear to be controlled by your watch. Also, it allows for your home automation and smart home devices to have some control over your phone, like pinging the notification light or vibrating the device. Tasker has a ton of plug-in apps available on the Google Play Store, such as AutoVera, which grants Tasker more control over smart home devices and how they interact with your phone. Also, AutoVoice, which allows you to make custom Google Now voice commands to trigger certain events. This makes Tasker a must-have for full smart home control.

The IFTTT, If This Then That, family of apps that are essential for home automation include the DO button, essentially a button you can command to trigger a specific function of your choosing, and IFTTT, a sort of chain reaction app that links apps and devices together to create an automatically triggering recipe. These apps are ever growing in their compatibility and functionality and are also essential for home automation control from Android Wear. IFTTT allows most common smart home devices to communicate with your phone, as well as with each other. Samsung Smart Things, Philips Hue, LifX, Nest and even Amazon Echo are all compatible with IFTTT. The recipes allow for the devices in your home to talk to each other, and work together to allow you to have a entire home wake up when you arrive. Say you want your Garage and porch lights to trigger when you arrive at home, then your door to unlock and lights to kick on afterwards, all automatically and at the same time, well that’s what IFTTT allows.

Other apps, like first party apps for certain smart devices, are also nice to have for Android Wear control over your smart home devices individually. If you want to have full control, Tasker and IFTTT combined make it so you can have your whole home on your wrist. Controlling every device without taking out your phone or getting up from the couch has never been so easy or cool.

The post Android Wear home automation: How to get started appeared first on SmarterWatching.