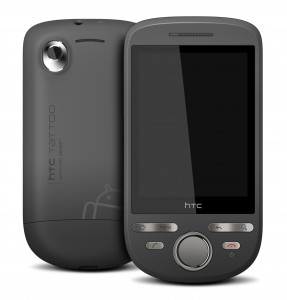 Do you hear that sound?Â  That would be the Android floodgates opening up.Â Â  Not only have HTC announced yet another Android handset, but this is the budget-friendly model expected to bring it to the masses.

The second phone to carry HTC’s Sense UI, the Tattoo offers specs very similar to the phones we’ve seen so far.Â  That is, with one notable exception – It will be free.Â  It’s not known which carrier will be offering the Tattoo, but according to our email, the “HTC Tattoo will be available in Europe first at the beginning of October, and will roll out in markets around the world in the following months…will be available from free on contract (details according to operator).”

If the name “Tattoo” doesn’t ring any bells, it’s probably because it was known as the Click for most of it’s pre-announcement life.Â  We’re hoping the specs in this cost-friendly handset indicate that HTC is ready to move forward with much more powerful stuff.

Fun stuff : HTC’s website for the Tattoo shows a one getting “inked” on the back for personalization. Looks like another customizable phone a la the myTouch 3G.

Here are the official specs to the HTC Tattoo.Â  Of particular note is the FM radio.Â  This is the first Android handset to sport one of those!

Google on Monday announced that Android 13 has begun officiall rolling out to Pixel phones with more devices expected in the coming weeks.
Read more
News and Rumors

Growing up, my dad had a turntable and speakers that my sister and I were not allowed...
Read more
News and Rumors