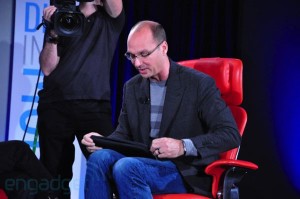 Forget that Gingerbread stuff from earlier today – Honeycomb is the new hotness.  Already.  Andy Rubin, the father of Android, was speaking tonight at  D: Dive Into Mobile where he decided to show off some of Android’s future, namely Honeycomb and a Motorola tablet with the latest version of Google Maps (5.0).  Without naming the device or providing too many details, Rubin said the tablet features an NVIDIA dual core 3D processor.  He then went on to briefly run through the demo which is described as “very different, highly customized, and more ‘desktop’  in flavor”.

Andy Rubin: This is Honeycomb. And it’ll be out sometime next year.”

Walt Mossberg : “Is this a version that happens to work on tablets, or is it for tablets?”

If I were to wager a guess, I would say that this device is pretty close to final and will be the unit used to launch Honeycomb in 2011.