AnTuTu, one of the most trusted and stable benchmarking app recently released a report on the top most popular smartphones of 2014. What can be a better way to bid adieu to 2014 than knowing how smartphones performed against each other? We got to see some new names in this year and though being new, they too didn’t fail to amaze. 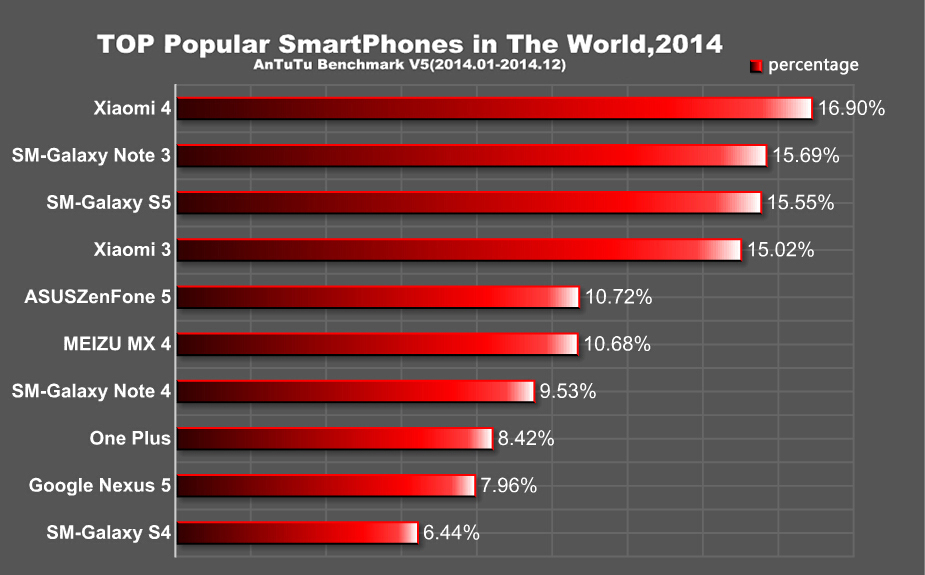 So, we will kick off with how smartphones are ranked globally. Xiaomi, currently in the lead, snatched the global market share by 16.90% with its Mi4. Last to last year that is in 2013, Xiaomi was in second place and so, indeed it has progressed since then. Samsung Galaxy Note 3 and Galaxy S5 being the second and third in the list also got a market share of 15.69% and 15.55% respectively. Not bad Samsung. Some notable runner ups were the Asus Zenfone 5, Meizu MX4 and OnePlus One. 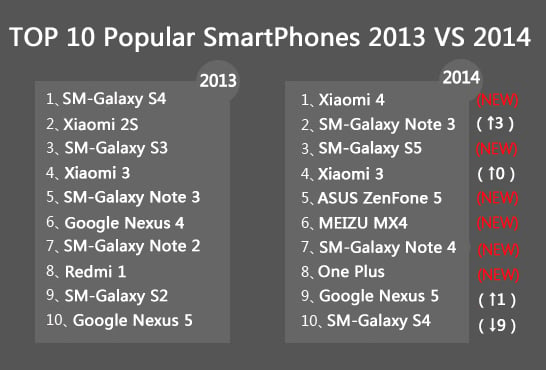 Comparing 2013 with 2014, we see that only Samsung Galaxy Note 3 and Google Nexus 5 are the ones which really progressed. On taking a deeper look at the smartphone rankings country-wise, it was the newest OnePlus One that has managed to capture global interest more than Xiaomi. Xiaomi’s large global market share is mostly because of its popularity in Mainland China. It also stands to prove that China is growing to become a big smartphone market.

Keeping these statistics in mind, I noticed a new trend. That is the rise of Chinese OEMs. Definitely, if we group all the Chinese firms together, they will form a large market share. Also, Samsung held the largest global market share with four of its devices in the top 10. And where the hell are you? Sony? LG? HTC? I don’t see them anywhere on the global list. They sure need to pump out some serious efforts or else this year will also go in vain.