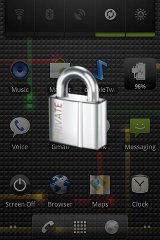 If your like me and you have a newer, high-end Android phone, you probably have to use the power button (located on top of the device most often) to wake and re-lock the device.  After a lot of use, this power button can become worn down and sometimes hard to use.  To avoid this, I have discovered a very clever, but simple application which locks the screen into standby by merely touching the screen.  The app I am referring to , which many of you may have already heard of is called Screen Off and it works great. Definitely something all Android owners who have a hard power button and capacitive buttons need.  The developer’s site can be found here!

To use Screen Off, all you need to do is put your finger on the app.  After doing this, the screen turns black and locks into standby mode after a small three to five second delay.  If you do not wish for the screen to turn black and lock, you also have the option of choosing a padlock symbol (seen above) or even a static snow.  That is really it.  There isn’t much else to it.  Very simple.

Overall, I have used this app for about 3 months now and have never had any issues on my Nexus One. It has been very reliable. Oh, and by the way, the app is also only 0.99 cents! Can’t get better than that. Check it out in the market. For those with scanners, the QR code is below.

UPDATE: You guys were right, I was wrong. 0.99 is what the app is priced. STILL a great price if you ask me. 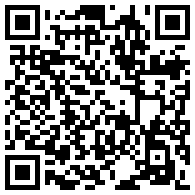