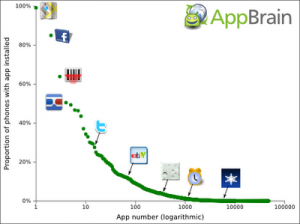 The team behind AppBrain has put together a very insightful look into the Android Market and the current state of its apps.  There are some truly interesting facts to glean from their research, some of which I’ll quickly outline.

The most popular titles in the Android Market are made up of some pretty familiar names – Amazon MP3, Facebook, and Shazam are loaded on nearly half of all phones, if not not more. Google Maps is estimated to be on roughly 99-percent of the handsets out there while Pandora can be found on roughly one in three devices.

Back in March, Appbrain created a filtering system designed to hide crap apps and fluff.  At the time, they were able to identify 30% of the Android Market as “spam”.  Today they see about half of the market as spam.  What will happen once the App Inventor starts allowing you and I to create drag/drop apps?

Of interesting note was mention of a developer named For-side.com Co. Ltd. About two weeks ago the developer (or Google) yanked nearly 4,000 titles out of the Android Market.  Picked up by the filtering system in place, AppBrain tells us that many of the apps were cookie cutter designs and auto-generated.  Who do you think was behind the sudden pull?