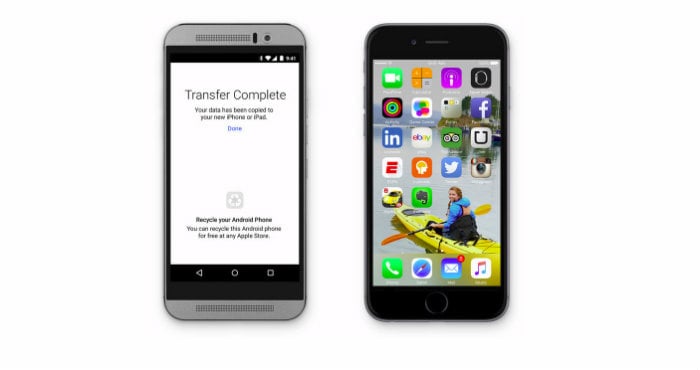 Of the many new features announced at Apple’s WorldWide Developer Conference on Monday, a few stuck out just a bit for those not intertwined with the Apple world. The introduction of Apple Music and Android Migration. While most will grunt or groan about this feature, Android Migration can, and hopefully will help, many people who decide to switch from Android to iOS.

There are already tools available from the likes of Samsung, Motorola and HTC, that help you move data from one device to another, but it’s not really intended to be used across platforms. That’s what is most exciting to me. In no way am I suggesting that anyone ditch their awesome Android devices for an iPhone, but if you do decide to, you will be able to easily transfer most of your information.

Now a big hiccup that is seen when switching between platforms, is remembering which apps you downloaded on your previous phone, before switching to the new device. You can either do something like I do, and write out a list, or just wing it. However Apple is hoping to make things a bit easier when it comes to downloading those apps you were using on your Android device.

It securely transfers your contacts, message history, camera photos and videos, web bookmarks, mail accounts, calendars, wallpaper, and DRM-free songs and books. And it will help you rebuilt your app library too.

Free apps will be automatically suggested through the App Store and Apple’s new suggestions page. Now the trickier one. Those paid apps. Paid apps will obviously not be able to be transferred between iOS and Android, or vice-versa, however when using the Android Migration tool, any of your paid apps that are available on both platforms will be added to your Wish List within the App Store. Of course this doesn’t solve all of your headaches, but at least all of your paid apps will be able to be easily located and purchased.

Man, this is getting weird.