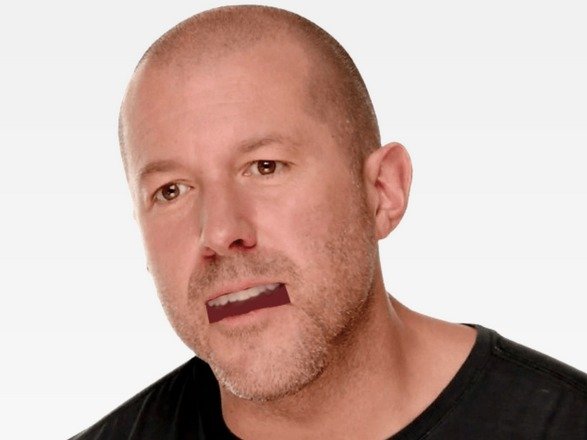 Sticks and stones will break my bones, but words will never hurt me.

If you don’t know who Jony Ive is, now is the time to come out from under that rock and learn that he is the Chief Design Officer of Apple, the most valuable company in the world. He has been credited with designing the iPhone, iPad, Macbook, and iPod amongst many other incredible products. He’s a British Knight(which I think is super cool), award winning designer and Honorary Fellow. Jony has set the course for the design of many products we use today.

Sadly, he is also too cool to let people make fun of him. I guess his successes allow him to cry over little old normal people who decide to poke fun at him. Amy Hoy and Thomas Fuchs, both now famous, are credited with creating a puppet and soundboard of Jony Ive that went viral after yesterday’s Apple event.

After gaining much attention with the soundboard and puppet, Hoy and Fuchs got a phone call from Apple’s big and bad lawyers asking that she take the soundboard down. Apparently Ive was offended.

“We’re fans,” Hoy says. “Jony Ive was just supposed to be silly fun. Like, my friends tease me about my chair addiction. We teased Jony about his dramatic delivery. Wink wink, nudge nudge. It was never meant to be mean. There was no legal threat, just a personal request. So… we took it down.”

Sure, I know Ive is way cooler than I will ever be in a million lifetimes. He has more money than I can even imagine. The dude gets to call himself a knight! If I were a knight, I would definitely carry a sword.

But come on, grow some skin. You’re famous. People respect you. Let them have some fun.

This type of behavior definitely proves to me that Apple now cares more about looks and keeping a good image than letting their work define who they are. I sure do miss the days of my personal hero, Steve Jobs, who is credited with being a revolutionary. Back when Jobs created the iPhone, iOS, and the App Store, amongst other things, Apple actually did revolutionize the world and their products spoke volumes about who they were.

The iPhone modernized the smartphone and brought it to the masses. There was absolutely zero need to make up new terms like “Retina display(HD),” “3D Touch(force touch),” “ion-hardened glass(Gorilla glass),” or “the Pencil(stylus).” Sadly Apple likes to steal products that already exist and rename them like they created them. I bet at their next event they rename the wheel to the Apple Round, and they also come up with some new name for sliced bread(I couldn’t come up with a funny term, so put some suggestions down in the comments for others to laugh at).

It is now more clear than ever that Apple needs marketing tricks and stunts to fool their customers into believing they own the best products.

I used to be a huge Apple fanboy, because at one point they actually were better. I sure do miss Steve. We were a much better world with him than without, and I sure do miss the real competition that pushed Google to do great things.

As big as Steve Jobs was in this world, he was still a human. I remember emailing him about my disappointment in the direction Apple was going, and he actually emailed me back, TWICE. Sure it could have been some employee who had access to the email account, but I do believe it was him. Boy, do I miss those days when Apple was great.

I know this is an Android website and this post really isn’t relavent to Android, but many of us Android fans used to be fans of Apple at one point and most likely share the same sentiment.

At least we have good ol’ Google.