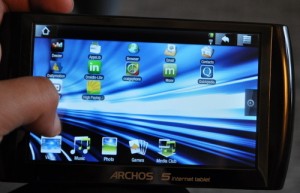 The Archos A5 series of media tablets has been officially announced and shown off.Â  After recently getting the leak treatment, we know have the first ‘name brand’ device to run Android that is not a phone.

What did we learn today that was not already known?Â  Well for starters, there is actually a size difference between the SSD and the HDD models.Â  According to Gizmodo, the flash versions are .4″ thick and sports a metal backing that fits nicely in the hand.

In terms of software, the big question is whether or not it has Flash.Â  Here’s where we get conflicting stories.Â Giz says there is no Flash whatsoever, while PC World says Flash 9 runs on it.Â  Either way, both report that Archos promises an update to the OS which will include Flash 10 once it’s available.Â  Sources says look for that to occur in December.

We also learned that there were some preloaded apps on the A5 which might familiar to Android users.Â  We’re hearing Twidroid, Deezer (streaming music), and Thinkfree come installed as well as a trial version of TeleAtlas GPS. UPDATED: The list also includes DailyMotion, eBuddy IM, DroidIn, QuickPedia, Moov, and CraigsPhone.

Here’s an introductory video that details the features, functions and apps that come with the A5. 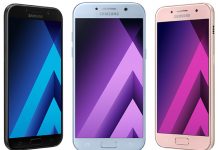