You smell that?Â  We’re beginning to detect a hint of donut essence.Â  We get the feeling that we’re going to be seeing the 1.6 rollout any day now.

We received an email from one of our readers pointing out a recent update to the T-Mobile MyAccount application.Â  He noticed that the app was showing as Update Available today so he decided to see what it was all about.Â

“Seeing as to how good the app already was I was interested as to how it could get any better.Â  So I took a look to see what the update was for and it was strictly to support the 1.6 update.”

Now we all know the SDK has been available for developers for some time now, and that the ADP1 got its Donut update this week.Â  The Sprint Hero is due out in a matter of weeks so it would not surprise us to seeÂ  all these handsets getting the OS boostÂ  to level things across the board.Â  Why would T-Mobile push out an update before Android 1.6 was released?Â  Are they being timed to coincide with each other?Â  Any one of these things is not enough to say definitively that it’s going to happen tonight or tomorrow, but taken as a whole, we think the stars are aligning. 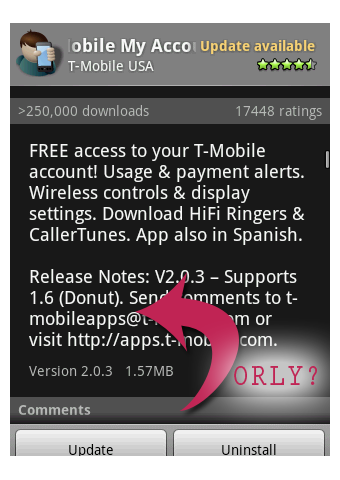 The burning question on G1 owner’s minds of whether or not they’ll get the update will be answered soon enough.Â  Don’t be surprised if you wake up any day now and find that little notification we’ve all come to love.

Multi-window support could soon be coming to Android