In need of a tablet but don’t want to spend half of a paycheck plus your favorite puppy to buy one? Look no further as Asus might have just what you’re looking for.

While certainly not the most agressive, the Asus MeMo Pad HD 7 should end up being the most popular of Asus’ models thanks to its attractive starting price of just $129 for the 8GB model. (The 16GB version will go for $149.) As far as specs go, the HD 7 sports a 1280×800 7-inch IPS display and weights just 302g. It will be available in pink, green, blue and white, and is powered by a quad-core ARM Cortex A7 processor. You can start looking for it this July.

Need something a little bigger? The MeMo Pad FHD 10 is the 10-inch version with a 1920×1200 IPS screen. It runs on the Intel Atom Z2560 processor and features wireless options such as Wi-Fi, GPS and GLONASS for navigation, as well as Miracast for wireless display. The FHD will come in 16GB and 32GB versions, and supports memory expansion via a microSD card slot. 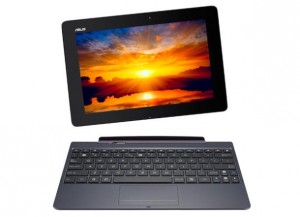 Maybe you are willing to spend a little more on a nicer tablet.  At the high-end of the Asus spectrum is the Transformer Pad Infinity. It sports a 10-inch 2560×1600 display and is powered by Nvidia’s latest 1.9GHz Tegra 4 processor with a 72-core GeForce GPU. Its additional keyboard dock includes a touchpad, USB 3.0 port, and an SDXC card reader. 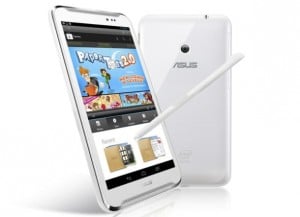 Now I know how you all feel about the ‘phablet and fonepad’ hype, but this one may be worth mentioning (after all, if we gave HTC some press, the least we can do is be fair.) The Asus Fonepad Note FHD 6 is a 7-inch Fonepad that has just become available in Asia. The Fonepad Note is meant to be used as a mobile phone, however that is all up to the user and how much they like holding tablets up to their faces. Though smaller at 1920×1080 pixels, its display has a higher resolution than the original Fonepad. The Note FHD 6 has a stylus slot and comes with Asus’ software, a feature that will likely be similar in function to their competitions. Price and availability in the states is yet to be known.

Overall, it looks like they have something for everyone at this point. Let us know, which would you choose, if one at all?