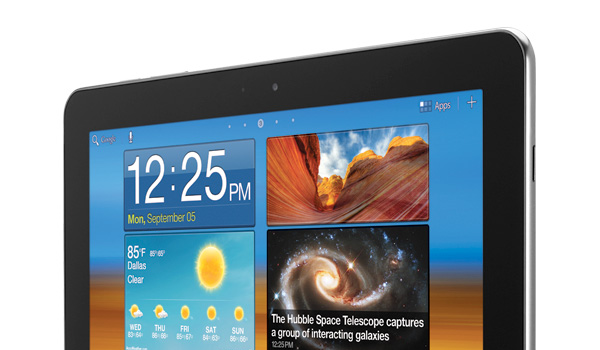 AT&T has announced its second 4G LTE-ready Android tablet today, the Samsung Galaxy Tab 8.9.  Due on November 20th for $479.99 with a two-year commitment, the ultra-thin tablet joins the HTC Jetstream as the only other tablet on the network able to support the faster 4G connectivity.  Speaking of which, AT&T is set to expand its 4G LTE footprint by another 6 markets on the 20th, hitting the goal of 15 total.  Look for Charlotte, Indianapolis, Kansas City, Las Vegas, Oklahoma City, and San Juan, Puerto Rico to go early next week!

If you think you need a little bit of extra persuasion to purchase the Samsung tablet, consider that for a limited time, customers who select a Samsung Galaxy Tab 8.9 will receive a Samsung Galaxy S II Skyrocket or Samsung Galaxy S II smartphone at no cost. Of course, you’ll still need to sign the appropriate two-year agreements for both units however that’s quite a deal!

AT&T tablet customers can choose a $35, 3 GB monthly data plan option with a two-year contract, and customers who do not choose a long-term commitment may still select one of two existing monthly billing options for tablets:

AT&T is the only U.S. carrier providing 4G using both HSPA+ and LTE technologies. HSPA+, when combined with enhanced backhaul, provides customers with compatible devices 4G speeds, meaning customers get a faster and more consistent 4G experience, even when outside of an AT&T 4G LTE area. Customers of other carriers that have transitioned to 4G LTE without further speed upgrades to their existing networks are likely to see a jarring drop-off in speeds when they move out of LTE coverage.